A Country At Stake

The United States is in dire need of gun control 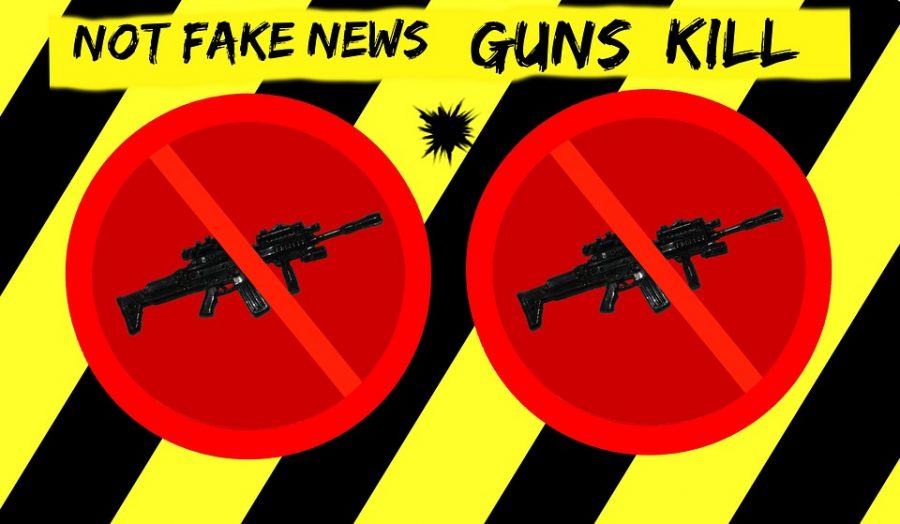 The graphic includes the popular term "fake news" and relates it to gun violence.

Sandy Hook, Parkland, Pulse, Las Vegas: all tragedies that have become household names. These four examples are just a few of the mass shootings that have stolen a multitude of lives. Gun violence is a tragedy that happens so often that it is no longer shocking. The results are overwhelmingly fatal to schools, families and communities. The solution to saving lives is clear: the government needs to enforce stricter gun control laws.

The Las Vegas massacre, The Pulse nightclub shooting, the movie theater shooting in Aurora, CO, the Virginia Tech slaughter, and the massacre at the Texas First Baptist Church are the five highest injury mass shootings in modern American history, and semiautomatic weapons were used in all of them. Research shows that semiautomatic weapons and those with high-capacity magazines are more dangerous than other weapons in shootings, according to washingtonpost.com. These types of guns make it easy for a shooter to unload a large amount of bullets into a crowd, all in a matter of seconds. Simply put, gunmen are less deadly when they have to reload.

I believe that banning semi-automatic weapons and high-capacity magazines would be an effective solution. In Australia, the government offered a buyback program that collected over 600,000 automatic, semi-automatic and pump-action shotguns. Afterwards, gun-death totals were nearly cut in half. The United Kingdom took a multipronged approach to gun control by offering a buyback program while also banning semi-automatic and pump-action. Their two solutions resulted in a maximum of 60 gun deaths per year in England and Wales, which has a population of 56 million. The U.S. has approximately 160 times the amount of gun-related homicides and is only 6 times as large as the UK, according to businessinsider.com. It is clear that bans are working in other countries, so it can be assumed that similar results would occur in the U.S.

Another effective approach to reducing gun-related deaths would be to apply intensive background checks and training for gun owners. In Japan, citizens who want to own firearms must attend an all day class, pass a written-test, and achieve at least 95 percent accuracy on a shooting range test. Japan seldom has more than 10 gun-related deaths per year in a population of 127 million people, according to businessinsider.com. In Missouri alone, you do not need a permit to own a firearm, you do not have to register your firearm, and minors can own and possess rifles and shotguns, according to news-leader.com. Making the process of buying a gun more rigorous clearly decreases the amount of deaths caused by guns, therefore laws should be changed at state and national levels.

The banning of gun shows would also help keep unregulated weapons off of the streets. At gun shows, licensed and unlicensed dealers can sell to guests. Unlicensed dealers do not have to conduct background checks, and a loophole is available for those selling from a “private collection.” They do not have to keep a record of sales if their intent is not to profit. This loophole means guns can be sold to those prohibited from purchasing weapons by the Gun Control Act, which attempted to regulate the sales of firearms, according to csgv.org. It also seems odd that anyone would be selling, emphasis on the word selling, a gun without the intent to profit. This is clearly a way for dangerous guns to make their way into the hands of more citizens, possibly those with malicious intentions.

Many opponents of gun control believe that it is an infringement on citizen’s second amendment right, but I disagree. Guns should be regulated like cigarettes, alcohol and medicine. In those currently regulated markets, people rarely argue that their rights are being infringed upon. Guns have the power to kill people, and any weapon with that power must be taken seriously. The U.S. has skyrocketing rates of gun-related deaths compared to other countries. This is clearly a problem that needs a solution. Although these deaths may never be able to be completely prevented, there are many steps that the government can take to limit casualties. The relaxed approach to firearm sales in America must end. Stricter laws are needed to save lives.