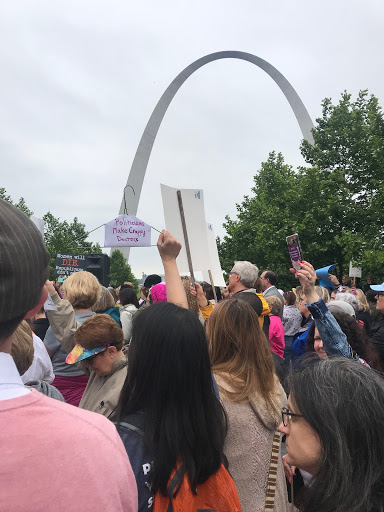 The gateway arch is featured in the background as protesters make their mark.

Protest Against Abortion Bans Make Their Way To St.Louis

Abortion rights activists make their way to St.Louis and march.

On March 21, 2019, the nation united to rally against new abortion laws. People of all ethnicities, sexualities, genders and religious backgrounds banded together to stand up for their rights.

In Missouri, the HB 126 bill bans abortion after eight weeks of pregnancy, according to washingtonpost.com. After complaints about the new laws, outraged citizens decided to try and let their voices be heard. Gathered in front of the courthouse in St. Louis, Missouri, with countless other marches all over the country, citizens exercised their first amendment rights.

Speakers tried to ignite a flame in the crowd and urge them to stop complaining and make a difference instead. Postcards that were already stamped and addressed to the governor of Missouri were passed out to share stories and opinions on the new bill. Phone numbers were posted on signs encouraging marchers to call and share beliefs. Ralliers went into the streets, chanted and demanded a change.

“I really liked how they had a wide variety of speakers that came from different backgrounds and had different credentials,” junior Buffy Parrish said “My favorite part about it was the solidarity that I felt from the men and women that came to rally, it’s easy to forget that other people feel the same way as I do about this besides my friends, but seeing hundreds of people grounded me further in my beliefs.”