Music is a large part of many people's lives, there has been a constant debate over whether Spotify or Apple Music is better. 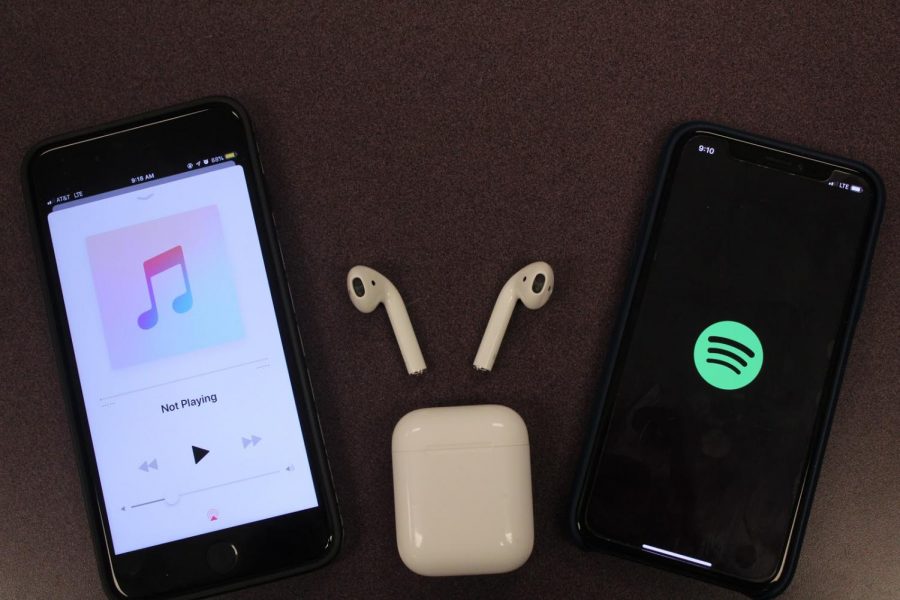 When choosing between Apple Music and Spotify, there are many important factors to consider like streaming quality, cost and features.

n the current era of technology, streaming music is at the fingertips of almost everyone. New services have upgraded in quality since the original iTunes and MP3 player days. These services offer a wide array of features to the listener, including custom playlists, advanced recommendation systems and many more useful tools. Considering these features, Spotify is clearly the better choice over Apple Music.

The two most popular music services are Spotify and Apple Music, Spotify encompassing around 75 million users while Apple Music with 50 million users. According to forbes.com. Regardless of the genre that one may prefer, both services offer a wide variety of music to fulfill the listener’s needs. Spotify also offers advanced features to maximize the user’s experience.

“I have been listening to music on Spotify for about four years and I really like their recommendation system,” said junior Feroz Khan. “The recommendations they give are really on point and I usually end up adding the songs to my playlist.”

While Apple Music also has a recommendation feature, Spotify does a better job in uncovering and tailoring playlists through its custom playlists and discovery features, according to cnet.com. Spotify also offers features like “Spotify Wrapped” where a playlist of the user’s top 100 songs for the year is created as well as a playlist for songs that expand the listener’s tastes in genres. Other information like the top five artists of the year, how many hours they listened and the user’s favorite genres are unveiled. Apple Music does not offer a feature like this.

The cost of the services is the exact same. Both services offer a plan for $10 per month, a $15 per month family plan that can include up to 6 users and a $5 discounted plan for college students. When one purchases Spotify premium, they are instantly offered unlimited access to Hulu’s ad-supported plan, which means that they can access Hulu with only a few commercials. Apple Music only offers Beats 1 Radio for free, but Spotify allows users to access the app in an unpaid version. The app still allows the user to have up to six skips per hour, and the user can make playlists. Spotify premium allows unlimited skipping and ad free music, so it is worth paying for if it is affordable for the user.

Spotify is a much stronger streaming service than Apple Music. Spotify has a lot more features than Apple Music does, which allows the listener to get an amazing experience. Spotify also offers more for the user’s money by building six personalized playlists daily and providing “discover weekly” and “release radar” playlists to introduce the user to new music. Spotify’s recommendation system is superior to Apple Music because it does a much better job at matching relevant suggestions to the listener. Spotify is the best music streaming service offered, and it needs to be chosen over Apple Music.